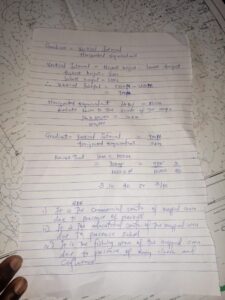 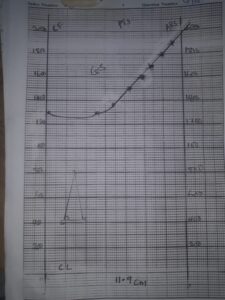 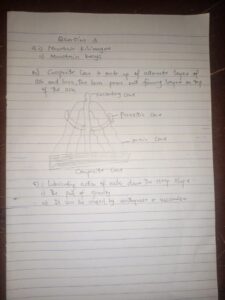 (i) lubricating action of water dam the steel slope

(iii)it can be caused by earthquake or volcanism

(i) Time taken for formation: The formation of a block mountain takes place all of a sudden.

(iii) Summit: The top portion or summit of block mountains are flat.

(iv) Slope of the land: They have steep slopes on all sides.

(v) Rift Valley/Graben: Block mountains or horsts have rift valleys or grabens lying adjacent to them.

(vi) Extent: Block mountains are not as widespread the fold mountains.

(vii) Rocks: Block mountains are made up of sedimentary and metamorphic rocks.

(viii) Tectonic movement: Block mountains are formed as a result of epeirogenic movement.

Block Mountains are formed when two tectonic plates move away from each other causing cracks on the surface of the Earth. When parallel cracks or faults occur, the strip of land or the block of land between them may be raised resulting in the formation of block mountains. The upward block is called a horst.

(7bi)
Exfoliation is a process in which large flat or curved sheets of rock fracture and are detached from the outcrop due to pressure release: As erosion removes the overburden from a rock that formed at high pressure deep in the Earth´s crust, it allows the rock to expand, thus resulting in cracks and fractures along sheet …

(7bii)
Frost action is the repeated cycle of ice formation and ice melt in the pore spaces and fractures of rocks causing disintegration of the rock. When water in rock pores freezes, its volume increases by about 10%. This can create a significant amount of pressure on rocks.

(8a)
An ecosystem is a geographic area where plants, animals, and other organisms, as well as weather and landscape, work together to form a bubble of life.

(8b)
(i)Biotic components: are the living things that have a direct or indirect influence on other organisms in an environment. For example plants, animals.

(ii)Abiotic components: This includes all chemical and physical elements i.e Soil and Sunlight.

(iii) Decomposes; these are micro organisms that decompose dead nutrients required by producer to prepare their food e.g Fungi and Bacteria.