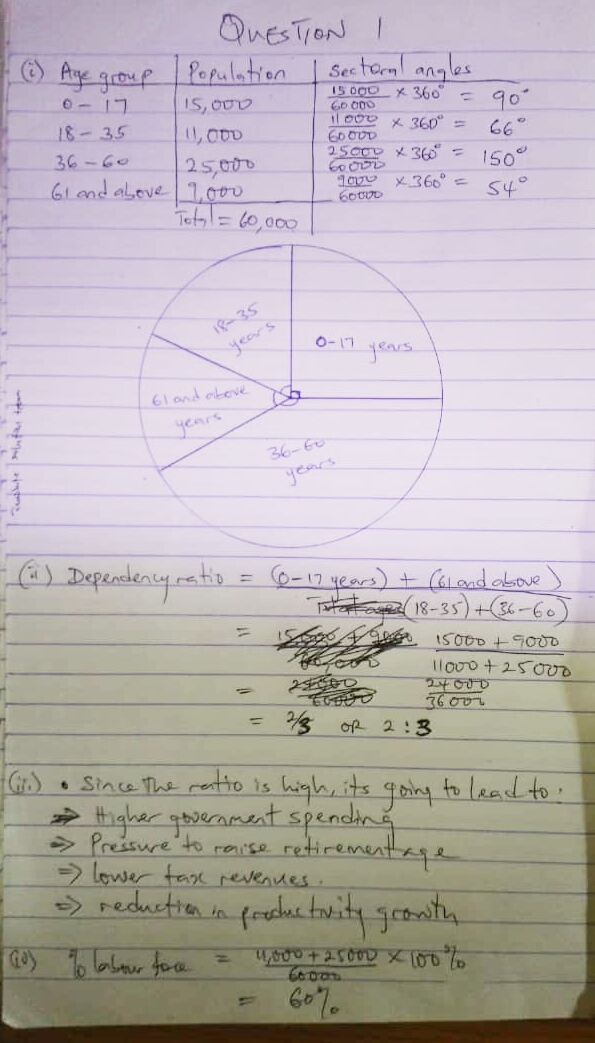 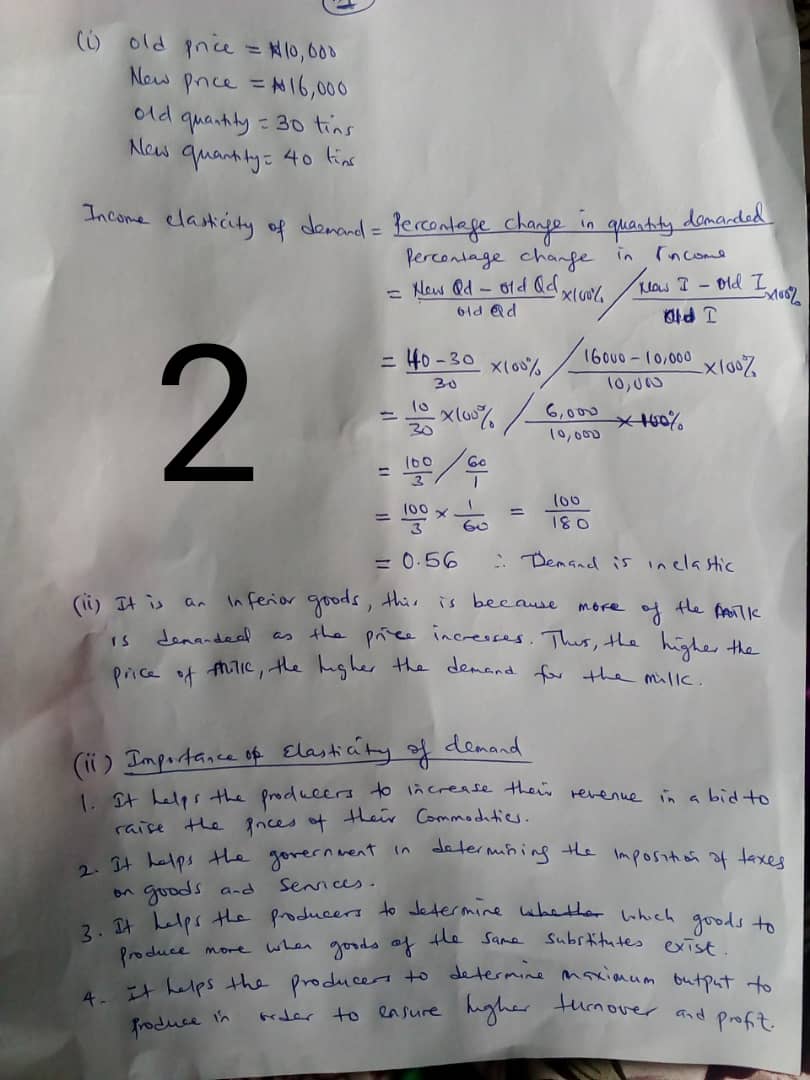 Division of labour is defined as the breaking down of a production process into a number of separate operations ,whereby each operation is undertaken or performed by one person or a group of persons(4b)Merits:(i)increase in production: division of labour and specialisation lead to increase in production because the various experts along the production process work together to boost greater production.(ii) Time saving:Division of labour helps to save time that would have been wasted in moving from one operation to another.(iii) Development of greater skill: Division of labour enables each workers to develop greater skills through repetition of the same processDemerits:(i) Monotony and repetition: In division of labour,a worker perform the same job on daily basis,the job therefore becomes monotonous and boring to him and this may lead to Loss of interest in the job being done(ii) Decline in craftsmanship: As a result of the use of machines in division box labour ,people no longer makes use of their skills in the production of goods,rather,they become machine minders.

Public enterprise is a business organizations established, owned, manages and financed with tax payers money by government of a country with the main motive of not making profit but to provide essential services to members of the public. Public Enterprises are owned by government. (5b) (i)Government Interference: This results in square pegs being put in round holes as general managers and members of board of directors are appointed on political basis. An adage has it that he who pays the Piper dictated the tune. (ii) Huge capital is needed: This goes further in making their establishment more difficult. (iii) Delay in policy and decision formulation: This is because their decisions and policies are taken and made by members of the board of directors, subject to government ratification. (iv) Bureaucracy: There are lots of complicated systems of administrations and a lot of red-tapism in them.

Mortgage banks are financial institutions that extend collateralized credit to consumers and commercial customers while commercial bank is a type of bank that provides services such as accepting deposits, making business loans, and offering basic investment products that is operated as a business for profit.

(ii)Lending of Funds; Another important activity is lending funds to customers in the form of loans and advances, cash credit, overdraft and discounting of bills , etc.

(iii)Financing Foreign Trade: A commercial bank helps in foreign trade by financing his customers and by accepting foreign bills of exchange.

(iv)Agency Service: A bank discharges agency services on behalf of its customers.

Public revenue is the total income accrues to all levels of administration (local, state and federal) or government from various sources. It includes all the capital revenue (receipts) and recurrent revenue.

(i) Taxes: It is one of the most important sources of public revenue.  Taxes are compulsory payments to Government without  exec of direct return or benefit to the tax payer”. It is a compulsory contribution of a citizen for the service of the Government towards public expenditure.

(ii) Commercial Revenue or Prices. The price is the payment of goods and services sold to them by the government. For example, fares and freights charged by the railways or roadways for transport services or electricity charged paid by citizens for electricity consumption etc.

(iii) Fees. Fee is the payment made by citizen for non-economic services rendered by the

Government . It refers to a payment for special benefits received by a fee-payer. Fee is a payment for services rendered for the benefit of the whole society.

(iv)License Fee. A license fee is paid in such cases where the Government authority confer a permission or a privilege rather than to perform a service of a more tangible and definite sort. Registration fee is one of the examples of this kind of revenue.

(v) Special Assessment. Where the Government provides certain services to the residents of a particular locality by which the value of the properties of residents increases, the Government or the authority may impose a special type of levy based upon the increase in the value of properties, on the residents of that very locality which is known as special assessment or better merit levy.

Trade by barter may be defined as the direct system and practice of exchanging goods for goods and services for services. (10ii) (i) It does not encourage Instalment payment: This is as a result of the difficulty in assessing the value and non durability of the commodities used for exchange. (ii) Difficulty in accesssing the value of commodities: For instance, it is difficult to determine how many tubers of yam will be equal to a basin of garri.

(iii) Exchange becomes uninteresting and unexciting: When one considers the ordeal one has to undergo in order to exchange one’s goods and services with others, the interest and excitement one has for the exchange will disappear.

(iv) It does not encourage deferred payment: Deferred payment is a system whereby one buys a commodity and pays in future, under trade by barter, this is not possible because the goods used for exchange are not durable.