(1a)
Authority can be defined as the legitimate power that a person or a group of persons possess and practice over other people.

(1b)
(i) Traditional Authority:
People adhere to traditional authority because they are invested in the past and feel obligated to perpetuate it.
(ii) Charismatic Authority:
Followers accept the power of charismatic authority because they are drawn to the leader’s personal qualities.
(iii) Rational-Legal Authority:
In this type of authority, power is vested in a particular rationale, system, or ideology and not necessarily in the person who implements the specifics of that doctrine.
(iv) Expert Authority:

(3)
(i) lack of ability to sustain sovereign enforcers. This includes stuff like, police, military, judiciary, diplomats, etc. To put it simply, no government can function without them, period.
(ii) Lack of sufficient military force or diplomatic leverage to enforce government sovereignty.
(iii) Over-dependence on foreign powers to enforce their sovereignty, or supplies for a major part of its economy or national defense.
(iv) Uncontrolled corruption, which would cause the government officers to abuse its power to government’s detriment. Notice that this is different from directed/sanctioned bribery, which simply redirects the real power to someone else within the government/nation.
(v) Lack of public trust, either due to cultural, economic recession, corruption, poverty, etc, one that lead to majority of citizens to revolt.
(vi) Invasion and conquest by a foreign nation
====================================

(6)
(i)The armed forces ruling Nigeria: This was the supreme body which performed legislative functions. This was composed of the service chiefs, top ranking military officers, attorney general with the president as chairman.

(iii)The national council of states: It is composed of the head of states, chief of general staff, minister of defence, service chiefs of the army, the navy and the air force ,the inspector General of police attorney General and all military governors. The council was charged with the coordination and the harmonization of the work of the various state governments.

(iv)The judiciary: It remained the same as in the civilian era with Chief Justice as the head. Inclusive are various tribunals which had judges and military officers as members.

(v)The civil service: The secretary to the military government is the head of public services. Director General replaced the permanent secretary by the 1988 civil war.

(7a)
A political party is an organization or group of people bound together by the same political ideals.

(i) To promote peace and security worldwide.
(ii) To draw Nations closer through sports, musicals, etc.
(iii) Interactions among nations bring about economic advancement especially in the areas of technology.
(iv) It promotes trade among themselves.
(v) To prevent misunderstandings and future conflicts between nations.
(vi) To create new culture that can lead the world to a more platonic place that all people can live together without much culture differences.
============================

(ii)Secession: The civil war reduced the possibility of a secession by any ethnic groups or states.

-NEGATIVE CONSEQUENCES
(i)Cost:The war cost the nation a lot of money. Property investments and an unestimated numbers of live were lost.

INSTRUCTIONS: Answer Four Questions In All. Two(2) Questions From Each Section.

(1b)
Advantages
(i) Migration helps to reduce the pressure on social amenities within one geographical region.
(ii) It helps to promote cultural integrity.
(iii) It aids the supply of labour.
(iv) It ensures the flow of capital.

(3c)
(i) Different factor endowments: some economies are rich in natural resources while others have relatively little. Trade enables economies to specialise in the export of some resources and earn revenue to pay for imports of other goods.
(ii) Increased welfare – specialisation (where countries have a comparative advantage see the next section for more detail on this) and trade allow countries to gain a higher level of consumption than they would do domestically and this leads to increased welfare and higher living standards.
(iii) To gain economies of scale – with specialisation and production on a larger scale than may be possible domestically, a country may be able to gain more economies of scale. This will lead to lower average costs and benefit consumers through lower prices.
(iv) Diversity of choice – trade enables us to access goods and services that we may not be able to produce ourselves.
================================

(5a)
(i)Peasants are households which derive their livelihoods partly from agriculture.

(iii)consumption activities and decisions, and are characterised by partial engagement in input and output markets which are often imperfect or incomplete

(5b)
(i)Better Supervision:
Unlike in industry, the area of operation for a worker in agriculture is very large. Supervision of work always presents a problem. If the size of the farm is small, the owner himself can effectively supervise the work of the labourer and can also guide and direct him to do his job in a particular way.

(ii)More Employment:
In peasant farming there is generally a greater scope for employment on the farm, when compared with other farming systems.

(iii)Greater Productivity:
Productivity per acre on a farm under peasant farming is larger than on farms under other systems, when the farms generally happen to be larger in size. The main reason for this is the greater intensity of cropping which, in turn, is due to greater use of labour per acre on small farms when compared with that on a larger farm. 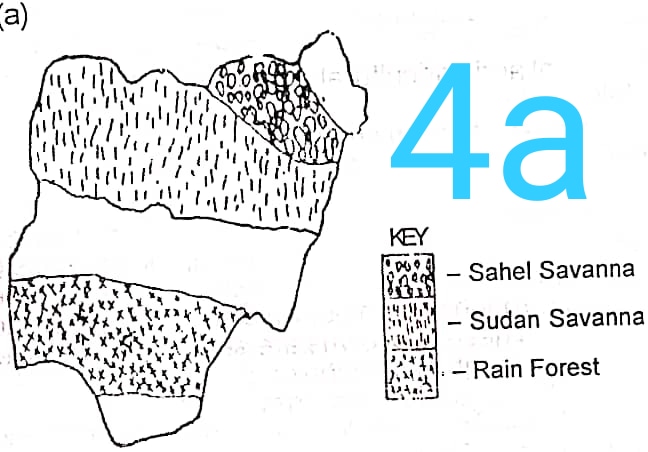 Note: You can only have access to this ANSWER PAGE if you have a password given to you by Admin. If you need the password send #400 MTN RECHARGE CARD to 08148844158.