The people of Israel left Egypt, rejoicing that they were free from slavery! God had used many miracles to deliver them. They had seen God’s great power and love for them. But now they were being led by Moses into the unknown.

Moses led the people out of Egypt through the wilderness to the Red Sea. But it was really God who was leading them. God provided a pillar of cloud during the day and a pillar of fire at night to guide them.

After several days they camped near the sea.

The people must have been fearful when they saw how wide and deep the sea was. They may have wondered, How are we going to cross over all this water to the other side? They probably thought they would drown trying to cross over the sea.

Meanwhile, God still had another plan for Pharaoh. He said, “I will harden Pharaoh’s heart one more time so he will go after Israel. Then the Egyptians will know that I am the LORD.”

So Pharaoh got his army ready and chased after them. He was sorry that he had let them leave. He wanted them back so they could continue to serve the Egyptians as slaves. He caught up with them camped by the sea.

Don’t be afraid
As the Egyptian army came close, the Israelites saw them. They were very afraid. They cried out to God to save them. They said, “It would have been better if we had stayed in Egypt and served them.”

But Moses told them, “Don’t be afraid. Stand still and see how God will save you. The Egyptians you see today, you will never see again.”

Then God told Moses, “Lift up your rod over the sea and divide it. The people will cross over on dry ground through the sea.”

Moses stretched out his hand over the sea. God caused the sea to divide. Soon there was a path of dry ground all the way across the sea to the other side.

The people of Israel were still afraid, but they had to walk into the middle of the sea on the dry ground. The walls of water were way over their heads, on their right side and on their left.

There were so many people with all their herds and flocks, it would take a long time to get to the other side. So God moved the pillar of cloud behind them. Then the Egyptians couldn’t come near them.

Stopping the Egyptians
But as soon as they could, Pharaoh’s army, horses and chariots also went into the middle of the sea on the dry ground. They tried to hurry to catch up with the people of Israel.

God saw what the Egyptians were doing. He caused their chariot wheels to fall off. They were stuck in the middle of the sea, not able to go forward or backward.

After the Israelites walked safely to the other side of the sea, God said to Moses, “Stretch out your hand again over the sea. The waters will come back and cover up the Egyptians, their chariots and their army.”

As Moses stretched out his hand over the sea, the water returned to its full depth. The high walls of water closed together. The Egyptians struggled to try to get out of the sea. But the water returned quickly and covered the chariots, the horsemen and all of Pharaoh’s army that had come into the sea after Israel.

Not one of the Egyptians was left alive. All of them drowned.

So God saved the people of Israel that day from the Egyptians. Now the people feared God and believed Him and His servant Moses.

Then Moses and the people of Israel sang a song of praise. They thanked God for delivering them from the Egyptians. Though they soon forgot, they knew God had brought them safely through the Red Sea. They were now free to go and worship God.

Eli was the priest of God at Shiloh where his two sons, Hophni and Phinehas were also priests of the Lord.
The Bible describes the children of Eli as worthless men who had no regard for the Lord. They com mitted the following sins against the Lord:
(a) They disregarded the custom regarding sacrifice to the Lord and instead of taking their share, they took what the three-pronged fork could collect from the pot.
(b) Contrary to the custom, they demanded, with force, raw meat from those offering sacrifice, before the fat was burned.
(c)They lay with women who served at the en
Even though Eli warned his children about the above evils, he did not take strict measures to stop the children from the evil acts. As a result of his weak corrective measures, the children did not listen to him, but continued in their evil ways. The attitude of the children towards the Lord resulted in a man of God coming to Eli to prophesy doom for his house, stating that the priesthood would be cut off from Eli’s house and the family destroyed to the extent that no old man would exist in it for ever and any survivor of this disaster would beg bread from the new and faithful priests to be raised by God. As a sign for the fulfilment of the prophesy, the sons of Eli would die on the same day.

(9a)
Peter advised the Christians living among non-Christians to abstain from fleshy lust since it battles against the soul.
He told them to engage in honest conversation among the Gentiles so that even if they speak against them, their good works would force the Gentiles to glorify God.

Peter told them to subject themselves to every human institution whether it is the Emperor himself or the Governors that have been sent to reward those who do good and punish those who do wrong. According to Peter, if they do this, they will put to silence the ignorance of foolish men.
He advised them to live as free men but should not use their freedom as a pretext to engage in evil. They should live as servants of God. They should honour all men, love the brotherhood, fear God and honour the emperor.

Peter concluded that Christ himself suffered the same fate. According to Peter, Jesus was reviled but he did not reply. Therefore, people must copy Christ’s example. 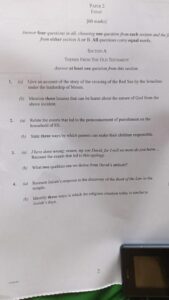 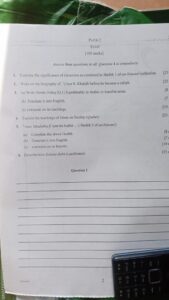 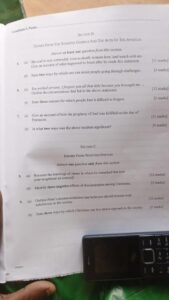 NOT: IF YOU ARE YET TO PAY KINDLY SUBSCRIBE NOW, THIS PAGE WILL LOCK AUTOMATICALLY ONCE WE UPLOAD ANSWERS. SEND #500 MTN RECHARGE CARD TO 08063608463.